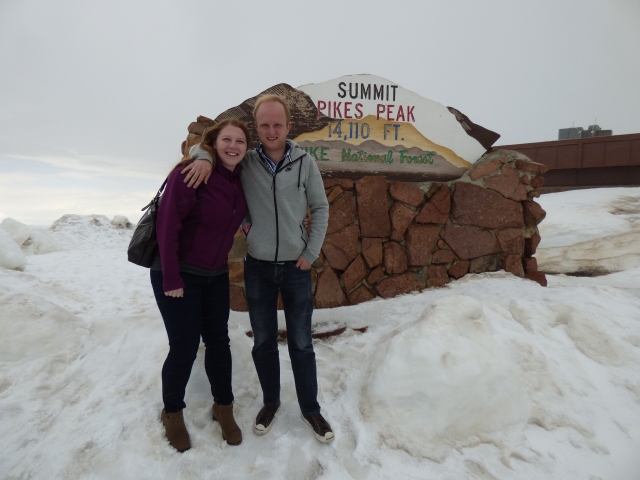 Sarah and I at the summit of Pikes Peak

The past days Sarah and I have been on a vacation in Colorado. It was our first road trip together in the U.S. Among many other things, we were to visit the Rocky Mountains, experience extreme heat and cold, visit a rodeo show and relax in natural hot water springs.

Sarah and I arrived 15 minutes from each other at Denver airport. We took it easy this first day as Sarah had to come back from Europe, crossing 8 time zones on her way. The next day, we head out to pick up our rental car. Sarah had performed some of her coupon magic, earning us a free premium upgrade. We were both a bit startled when we got the keys to our fancy Chevy Impala.

Getting used to the car, we drove south, toward Pikes Peak Cog Railway. This is a very old train that brings visitors to the top of Pike’s Peak at 14115 feet, a summit of the Rocky Mountains. Along the way it overcomes slopes of over 20 degrees. It gives you amazing views of the mountainous landscapes. You pass through several types of landscapes and climates during the 40 minutes to the top. In our case the temperate was about 85 degrees F. in the valley and only 18 at the summit. During the trip your body loses up to a liter of water through respiration alone – pretty crazy!

We were a bit unlucky as the weather was terrible: hail and thunderstorms were terrorising the mountain, greatly limiting the views we had. On the top we had to wait for a while before exiting the train as we were literally in the middle of a thunderstorm. Both Sarah and I could feel some minor symptoms of altitude sickness. After taking a few pictures and buying some souvenirs the train made its way back down. On the way we saw multiple marmots and one deer, which was a nice extra to the incredibly stunning rock formations.

At night we drove to the town of Salina, where we had to look very carefully to find a place that would serve us dinner. The thunderstorms were insane. Combined with the melting ice water that was coming down from the mountains, this resulted in rivers that were about to flood and roads covered by massive, tricky puddles of water. We spent the night at a cozy B&B, built entirely from wood. The owners had 2 very nice dogs. We were warned that one of them was a thief. It was only at the last possible moment that I could prevent the mischievous creature from stealing Sarah’s sandals. The views from the B&B were amazing. I couldn’t decide whether I was impressed more by the (seemingly) permanent ‘rocky’ mountains or by the more transient ones up in the sky. 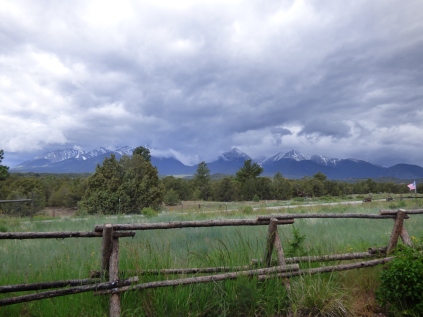 View from the B&B

Backyard of our B&B 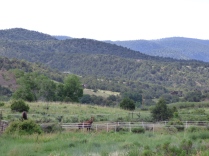 View from the B&B

Living room of our lovely B&B

Our rental car in front of the B&B

After a sugary breakfast prepared by our host, we received a message that the rafting had peen postponed to the afternoon. We therefore decided to drive to the ghost town of St. Elmo, an abandoned former mining town. The drive would be only 19 miles, yet it took us over an hour to get there as a large part of the route was a dirt road. The town itself was not that interesting, perhaps a minor tourist trap, but Sarah had a lot of fun playing with the chipmunks.

Very wild river on the way up to St. Elmo 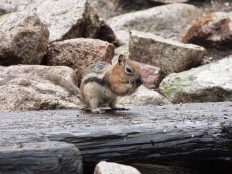 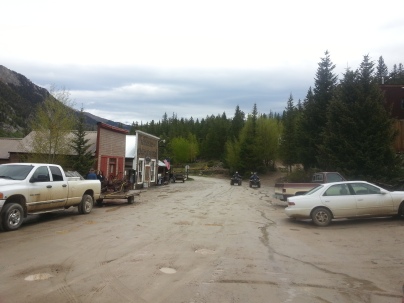 We then made our way toward the rafting organisation. Sarah and I got more nervous when we saw a number of flooded mountain streams. Locals had already warned us at least 3 times about dangerously high water levels in the Arkansas River, one of them even telling us about a boy that drowned a week earlier. Having arrived at the place, we quickly put our wetsuits and helmets on, and were driven to the river in a big school bus. 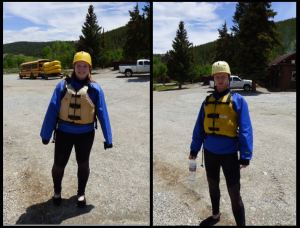 Sarah and I, suited up for an afternoon of rafting on the Arkansas River

We carried the surprisingly heavy boat to the river. Tentatively, I stuck a foot in the water. Goodness – ice water indeed! The first few miles the stream was rather calm, allowing us to get a bit more comfortable with the river and the peddling, and to get to know the other people on the boat. We were accompanied by 3 people from Georgia and the instructor.

The river and the landscape got rougher. Both sides of the river were lined with amazing rock formations. More than once did I have to swallow a gulp of cold water, because I was staring at a river bank, a rock that dangerously loomed over the water, or a juniper tree from which locals tend to make gin, therefore missing the upcoming turns in the river. Any description of the surroundings I would give you would miserably fail to capture how majestic, rough, and utterly stunning they were. Every few minutes the excitement in the boat would rise as we could hear the noise of approaching water falls. What a thrill!

Unfortunately we have no photos of our rafting experience. The boating company had some pictures taken, but offered them to us at a staggering $55.

Along the way we saw this deer. He looked at us, decided he didn’t trust the situation, and bolted. Safe in the woods, he looked back one more time before disappearing.

Listening to country songs, sometimes with titles as unusual as “She thinks my tractor’s sexy“, we drove back to Denver, where we would spend the night. The next morning we were to explore more of the capital of Colorado, after which we would make our way towards Rocky Mountains National Park over the Peak to Peak Scenic Byway–but more on that later.