Today, admittedly during working hours, I scanned the headlines of news website nieuws.nl when I came across a picture that startled me. Quickly, I changed to another tab – I did not want my colleagues to see this picture on my screen at work!

The startling screen I saw was this one: 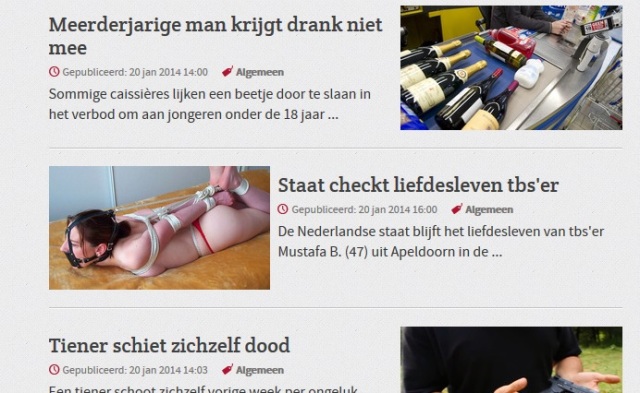 I remember thinking it to be a rather extreme picture (no, not the bottles of wine) for a mainstream news website. Later on, I read the article itself, again guided by the deterring picture:

The article tells about Mustafa who shot and killed his wife years ago. Mustafa, according to the article, has been doing pretty well after serving his sentence, and is now living together with his three daughters. In addition to serving time in prison, Mustafa was sentenced to compulsory behavioural treatment. Mustafa now claims that this fact prevents him from finding a new girlfriend – his history seems to scare women away (makes sense, I would say).

That’s it – that was all that was in the article. Can someone please explain to me what the heck that gruesome picture is doing above this article? In the entire article there is not a single word that is even remotely related to what is depicted by the photo. Gosh, even if Mustafa would find a woman that isn’t scared by his past, she’ll certainly be scared away by this photo!

The above being an extreme example, I remember from my internship at the Global Policy Journal that picking photos to guide an article is a tricky and more difficult task than one may suspect. Articles are generally being sent in without pictures, but almost every article is published with pictures. Online journals are therefore often subscribed to a huge database with more or less neutral pictures that can guide a variety of articles. I was told when I started interning that a good picture does not really attract attention – it just makes sure that the article doesn’t look very dry and wordy. Well, the above article certainly doesn’t look dry or wordy, but I think we can all agree that it miserably fails in not drawing attention.

Dutch historian Martijn Kleppe wrote an article about a certain photo that was used dozens of times by a number of online journals and news websites as a guiding picture in a similar way as the one above. It was this picture:

Mr Kleppe found out that this picture was exclusively used in a combination with articles that were related to the troubles Moroccan youth were creating. The picture would have some stereotypical characteristics that would explain why it was chosen so often; it allegedly shows imprisoned Moroccan youth wearing hoods. Some examples: 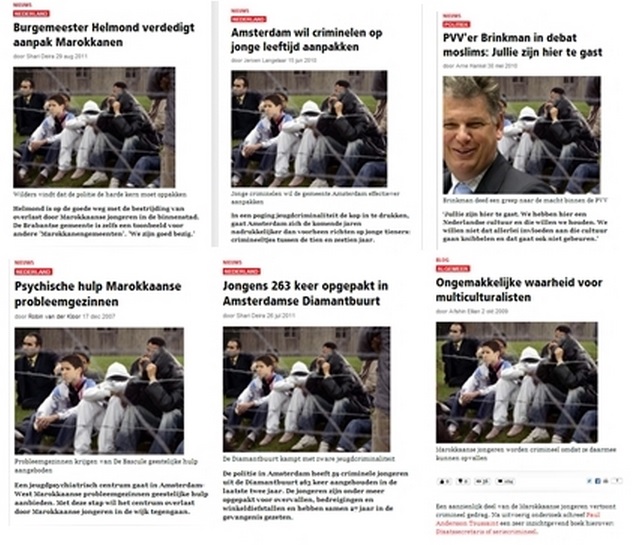 After some research Mr Kleppe found out what was actually shown on the photo. Very observant individuals may have already recognised the barbed wire and the little hill of Kamp Westerbork, a World War II Nazi refugee, detention and transit camp in the northeastern Netherlands. According to Mr Kleppe, this picture actually shows a group of young men who listen to someone who survived the horrors of the camp.

Mr Kleppe ends with noting that it may be expected from journalists to include a caption when necessary. If they would have tried to write the caption they would have found out that the picture is terribly inappropriate, and they would not have used it. For the case of the news article I mentioned at the top this is true as well. The one choosing the picture has some explaining to do, I’d say.